First of all I must thank everyone who supported my ski addiction this season through product and finances; I really appreciate it and did my best to promote your products through photos, video, competition, and conversing with the public.

This season was one that will go down in the history books for the amazing snow and fun trips.

Through out the year I was able to work with amazing photographers and cinematographers as I traveled around BC and the US: resort and snowmobile skiing for feature articles, as well as freelance photos for magazines, and video for TV and film. I also spent time competing internationally in big-mountain skiing. The following is an itinerary of my season:

Before the snow fell, I fulfilled a long awaited goal, I was accepted onto the Howe Sound school district’s substitute teaching board. I have a B.A. in kinesiology (study of human movement) and a B.Ed. with a minor in mathematics, thus qualifying me as a physical education and math teacher. As a substitute teacher this season I was granted the flexibility to ski and travel at my convenience, meanwhile working with students in secondary schools in the Whistler area. As many of the students recognized the Treadway name I played an influential role as I discussed my skiing career and sponsors, and had the opportunity to encourage students to pursue their goals of skiing, snowboarding, skateboarding, and mt. biking. 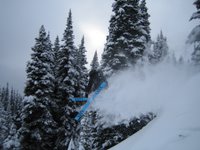 December and January were spent in the Whistler area, skiing many days on Blackcomb and hiking into the backcountry; skiing conservatively at first and regaining my mental focus, physical strength and endurance, and avalanche awareness. Blackcomb is an amazing training ground with its long vertical, and challenging lines that include big cliff drops and exposure.

I also spent a lot of time in the backcountry on my snowmobile or ski touring through out Dec/Jan.

During the month of January it snowed 16 feet in Whistler so the skiing was amazing, but the photo opportunity days were limited to a few days with Bryne Hughes and Dave Mossop.

At the end of January I packed my Toyota 4x4 and drove to Golden BC where I picked up writer/photographer Mike Berard for a road trip to the US Freeskiing Nationals. En route we stopped in at the infamous Jackson Hole; arriving at 1:00 AM we set up camp in the parking lot, which already had 6” of snow. Around 5:30 the plow truck honked its horn for us to move, and yelled for us to be at the tram early as this was ‘The Day’. 36” of light snow had fallen in the last 3 days, and the sun was rising. This was definitely a highlight of my ski career and a childhood dream come true. We were able to get some amazing shots and skied until we could barely stand.

It was difficult to leave Jackson, but the Snowbird competition was about to begin so we continued haul’n ass until Salt Lake, where my truck blew a transmition bearing. I spent the next 5 days trying to find an affordable solution to this problem, and attempting to focus on competing.

I qualified 23rd out of 80 males, then finished 22nd the first day and had a small fall during the finals that landed me in 21st overall. Not to make excuses, but I believe I could have done much better under different circumstances as I had minimal time for inspection runs and therefore didn’t ski as confident and aggressively as I normally do.

I was able to limp the old Toyota in 4th gear back to Fernie, BC where Mike Berard and I shot photos for a few days. We also hit up Castle Mountain where patrol gave us free reign and we were able to get some good shots. (If you are in the area and the snow is good, Castle Mt. has some of the best-fall line skiing in Canada)

I bought another Toyota 4x4 in Fernie and headed back to Whistler in time to hook up with my older brother Dan as we had a snowmobile trip planned for Montana. We loaded both our sleds on his F-350 and ripped to Bozeman, Montana where we met up with Winc Inc. Productions – producers of last seasons' Waiting Game, and this years' Respect. Winc. Inc. also produces a High Definition TV show Nomads on Rage TV, for which we were shooting a one hour segment of snowmobile skiing, featuring 'the Treadway brothers' shuttling one another up slopes via snowmobile in the Montana’s Backcountry.

Our crew also included skiers Will Burks and Cody Townsend, and still photographer Shawn Fulton, who was shooting the story for Freeskier magazine. In addition to Winc. Inc. Productions, snowmobile videographer and owner of Frontier films, Erin Von Hessinger, joined us to film for his 9th sequence of the 2-Stroke Cold Smoke series. We took a break from the sleds for a day and checked out Bridger Bowl as were blessed with 36” of cold smoke overnight, followed by calm winds and sunny skies.

After a weeks worth of film and photos, I returned to Whistler, only to hop on a ferry to Vancouver Island where myself and fellow redneck rippers Ryan Oakden and Al Hockensen skied Mt. Washington and Mt. Cain, and snowmobile skied the once operational Forbidden Plateau. 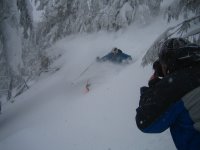 This trip was made possible by Mike Berard, who was writing and shooting photos for a feature article in SBC Skier. As our crew headed to Toffino for the surfing part of the story, I had to bail out and meet up with my two brothers and photographer, Blake Jorgensen. 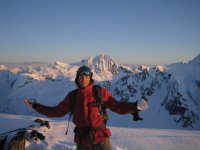 Once again this trip was not long enough, despite the continued high pressure and perfect snow I had to move on; this time it was to a small corner of BC’s Kootenays where I met up with a crew of ‘Noboarders’ (snowboards minus bindings). The Noboarders guided me up the mining roads on sleds to zones of 1500ft long tree runs back down to town. The week spent in this area was enough time to explore many zones and be prepared to return with a photographer and writer in the future.

I returned to Whistler and spent the final weeks of good snow sled skiing and shooting photos with local photographers and good friends: Damian Cromwell and Bryn Hughes.

Looking Back: This season I took advantage of opportunities to ski and shoot photos and video with talented professionals in unique places. Through out my travels I found myself in small corners of North America, skiing with great friends in good conditions, and producing amazing photos and video.

Next Season: I plan on doing more of the same … having fun skiing with great people in amazing places - Europe and Alaska are creeping to the top of my must ski list. I would like to continue skiing with my brothers and friends who happen to be talented photographers – Blake Jorgensen, Damian Cromwell, Bryne Hughes, Mike Berard. Due to the success of last season there are opportunities for me to be part of feature articles for magazines again, as well filming with Wink. Inc. Productions.