Wow, it’s hard to believe that another season has come and gone, and I am once again waiting with anticipation for a season comparable to the past two. Although I’m an eternal optimist, it will be difficult to compare to 07/08 early deep powder, the stable snow pack on the coast range, and great timing of sun, snow, friends, and photographers.

The season kicked off with a bunch of deep days, shredding with friends on Whistler/Blackcomb. It was the typical early season training; skiing top to bottom runs and feeling the legs burn.

Christmas was especially special this year as I joined many long time friends from around BC to celebrate the long awaited opening of Revelstoke’s ski hill. We were blessed with Revi’s reputable powder, and seemingly endless untracked lines.

Returning to the coast I fired up my snowmobile and headed north to the small mining town of ; where I had arranged a lodge for the week of New Years. Twelve of us spent five days sledding up mountain peaks, and shredding down on skis and No-Boards. 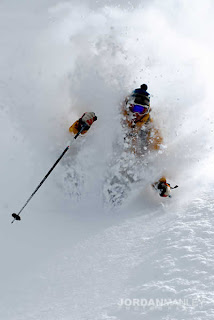 Fortunately for me the reality of returning home after a trip isn’t too harsh, especially when it means shredding the resort, and skiing the sled accessed backcountry. After a few weeks of my routine, I headed to the beloved Kootenays where I joined my brother Dave and his girlfriend (now wife) Tessa, and photographer Jordan Manley (www.jordanmanley.com) for a week at Monashee Powder Cat skiing. Our days were filled with deep pow and lofty airs. The guides were amazing and continued to inspire us with their terrain, while back at the ranch, the cooks dazzled us with dinner. It was an awesome week with great hospitality by the owners and staff of this ‘Ma and Pa’ operation. Add this spot to your hit list this season: http://www.monasheepowder.com

Dave and I continued deeper in to the heart of the Kootenays to the renowned hippie commune known as Nelson. Upon arrival, we hooked up with local photographer Bryan Ralph who guided us around Whitewater ski hill. With no new snow in the Whitewater’s forecast, Dave and I headed to our old ‘stomping grounds’ of Fernie, where we met up with long time local and renowned photog. Henrie Georgie. Henrie pulled some strings and arranged some early mornings of shooting on the hill.

It felt great to be back in the , but we had to get to the Red Bull Cold Rush at in Rossland. Day 1 kicked off the event with competitors’ sessioning jumps on top of cliffs. I started off strong with a big back flip on my first jump, but then under rotated a double back flip on my second air, which left me with a sore ankle, hindering my performance in the ‘’ event on day 2. Day 3 was the hiking aspect where I finished 3rd. Check out the video at:

Following the celebration of my little bro’s winning of the Cold Rush, I limped back to Whistler to rest my ankle and move into my newly acquired home in Pemberton. Pemberton quickly proved to be an amazing staging point for exploration into the heart of the , and the remainder of the ski season was spent with friends and photographers skiing and shooting in the area. Check out the photos for yourself … http://www.daryltreadway.com/Photos.htm

In addition to published photos, I also had two published articles in Skier magazine.

I competed in the Red Bull Cold Rush, which was edited and broadcasted on Rip TV.

I edited my 16mm footage from Teton Gravity Research, filmed in 06/07, and published it on YouTube. http://www.youtube.com/watch?v=KAvHEY-Hv1k&feature=email

The snowmobile trip I did on the Coast Range of BC with Wink Inc. Productions aired this past season as a one hour episode of Nomads on Rush HD. The episode was entitled Ghost town: A Snowmobile and Ski Adventure

I'm looking forward to skiing and shooting many more fun lines in the area, and around B.C.