Often, skiing's success stories are due to detailed planning, but in this case, success came as a result of my wide open holiday schedule. Bros Dan and Dave were scheduled for a trip to Great Canadian Heli ops. in Roger's Pass, BC with photog Jordan Manley, and videographer Jamie Bond; until fate threw a curve-ball. Dave broke his collar-bone, and Dan couldn't leave Whistler's bottomless pow.
GCH didn't care which Treadway was skiing, but without Dan and Dave's long flowing golden locks a female skier was needed for marketing. Thus, Rossland's homegrown Leah Evans entered the scene to humbly show off her honed Kootenay ski skills. 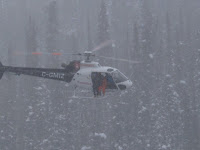 Despite below average snow-depth, we skied perfect quality pow for 4 days, while being pampered with gourmet eats through out the evenings. GCH was very flexible, allowing us to take the doors off the heli for J & J to dangle out the side and follow us down the mountain for overhead shots. Jordan's harness was a little tight and he now speaks 2 octaves higher, but he maintained his professional focus and still nailed the shots. 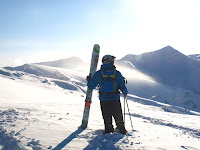 When the skies cleared we hit the alpine, and were awestruck by the giant peaks that dotted the landscape. Mt.Sir this and Sir that were the 'rogue waves' in a sea of giants; surpassing 10 000 feet of elevation being the requirement for a Mt. Sir.

Snow stability was variable, so we were pigeon toed to smaller slopes where we could manage avalanches if they released. 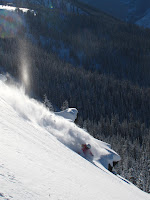 Guide Rob recognized our backcountry experience and despite one small slide, still allowed us to take reasonable risks to get the shots we were after.

Those big peaks are burned in my memory, and will haunt me to get back there with better stability ... hopefully this season.
Posted by treadski at 9:12 AM