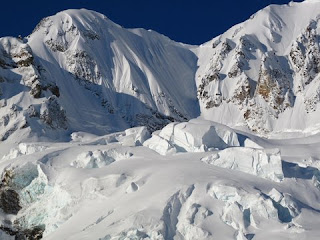 The Coast Range has been hiding behind a veil of storms, high winds, flat light, avi hazards, and unfortunate timing. Until recently I have waited impatiently, attempting to satisfy the hunger by pow-tree skiing, but the anticipation was driving me mad; we had to get into the alpine.

And so, as we annually celebrate the rising Son, we again celebrate the secular gifts Easter brings: sled access big mountain lines!

Joe Lax and I planned to ski a tight group of volcanoes that haunt the horizon of our valley. After a grueling day of trail blazing into the alpine we returned to find bro Dave with a welcome fire warming the cabin.
Predawn patrol had us in the alpine and climbing the final steps to a north facing spine face when I heard rumbling and a yell from above. I reacted quickly, stepping to the edge of the ridge as 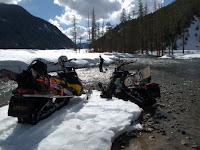 plumes and blocks of snow whipped past me. Hiking safely up the
south ridge, we were dangerously close to a loaded pocket of solar affected snow pack and when Dave and Joe crossed the top of the pocket, connecting the dots between rocks and exposing a shallow start zone, it slid.

Minutes later, I was cresting the col and glaring down the half-shaded slope that appeared to drop off the earth and land in the icy cracks of a

frozen Hades. A rope assisted ski test proved stable, but I still didn't completely trust the feeling of the snow. I skied cautiously; gaining confidence as I skied onto the spine and 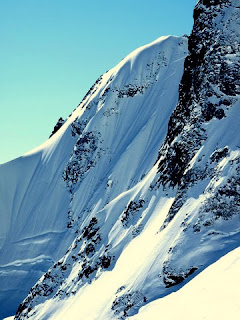 into the rocky gun barrel, scraped through the choke, pulled a Wayne Wong above the gaping crack, and raced out. (My tracks are on the photo to the right)

I was still shaking as Joe wiggled down another spine, aired the 'chrund and slid to a stop as we high fived. Dave again found the trigger to a convex pocket at the top of his line which peeled, and stripped his line of snow, forcing him to an adjacent spine.

Happy to be safely off this face, we skied some fun laps on another volcano, and sadly walked away from the real gem we had our sights set on. (See below) 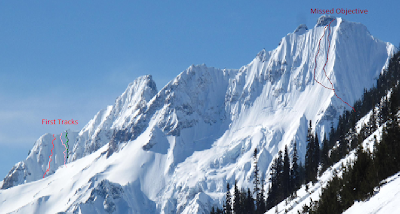