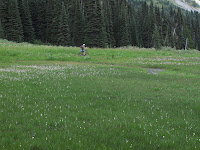 Returning from a 2 month summer surf trip in Central America, Pam and I upgraded our dinosaur bikes to the popular Giant Reigns and explored a bunch of big trails around Pemberton.

"Titties and Beer" was renamed on Sept 18th when the late Jack Hannan would have celebrated his birthday, and the trail he was rebuilding 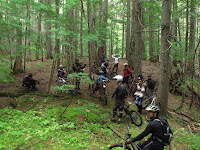 was given the new name of "Jack The Ripper".
A crew of friends gathered to christen the recently completed trail, and lay some first tracks down steeps that Jack would have been stoked on.
Shorter fall days don't allow for as much climbing time, so many of the trails we have truck 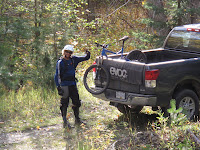 shuttled, then climbed further up.
Piling bikes over the tail gate of our new Tundra, Pam, friends, and I have been riding trails off the Duffy Lake Road, the Hurley Pass, and other logging roads leading out of the Pemberton valley.

Our most recent adventure involved hiring a Beaver float plane to drop us deep in the Chilcotin mountains at Warner lake, where 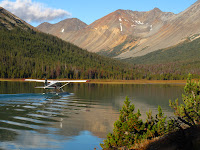 we began our 7 hr. return peddle to civilization. The views from the sky and trail were breathtaking in the crisp fall sun.

It's hard to imagine the biking being any better; but the change of seasons will mean a change of hobbies, where hunting to fill the winter freezer will soon take president.
Posted by treadski at 9:29 PM