This year concludes a decade of skiing in the mountains for me. In ’99 I moved from Ontario to a camouflage camper in . Now 10 years later many of my dreams have becime fond memories, including a recent trip to the famed …

wasn’t a free hand out. I wasn’t given a travel budget by sponsors and thrown into a heli to drop me on top of beautiful mountains with perfect snow. No, it was a long journey that began as a childhood dream, and became a reality this year as I began climbing and skiing many of the big mountain lines around . I enrolled in the Pemberton Big Mountain Hunting Club, and bagged Mt. Joffre, Mt. Currie, Mt.Sampson, Mt.Meager and Pylon. 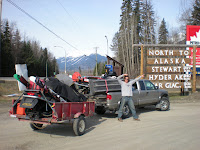 Brother Dave and I had dedicated April to being on call for a weather window in . When we had all but given up, the weather broke, and on April 24th, we loaded truck and trailer with sleds, sleighs, jerry cans, food and ski gear. By 6 PM on Saturday the 25th we were at our new home; a 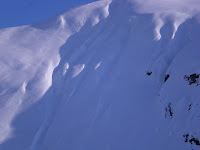 refurbished trapper’s cabin, 40 km up the Salmon valley, at the toe of the Salmon, Berendon, and Frank Mackie glaciers. We unloaded our gear and rallied up to ‘’ where Dave had proposed to his wife Tessa the year prior. We skied a couple lines each as the sun slowly set and cast long shadows down the glacier. 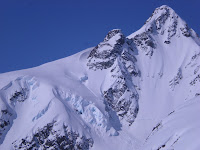 Day 2 - Sunny. We tandemed (doubled on the ski-doo) up a ridge and skied a 1500 ft warm up run. With a stable snowpack we continued up the ridge, and hiked the peak, then dropped into the 2500 ft face, and 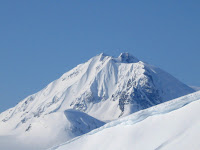 skied down another 500 feet of glacier back to the sled. From the peak, we witnessed some impressive views, including a big spine face across the Salmon glacier, so we ripped up to the top and railed 3 lines each before heading back to the cabin.

Day 3 – Sunny. The spines were so amazing that we headed straight back to catch them in the morning light. Wow, possibly the coolest lines of my life! 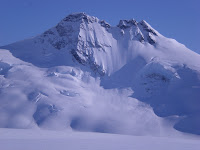 Once we skied every combination of lines, I had to check out the North face of this big peak that loomed in the distance. As we sledded around to the North side, this beautiful long sustained face came into view. We were able to sled half way up, and then we hiked the rest. The ski down was awesome … big long fast turns in slivers of sun light. A classic for sure!

Day 4 – Sunny. We sledded up the backside of this peak and hiked to the top, where we found a weather station/cabin on a cliff. We were able to climb 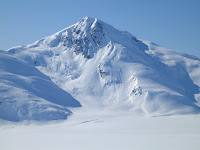 onto the roof and see the ocean. Then I roped up and slid into the ‘curve ball’ couloir on the North face. 3000 ft later I arrived at the sled, and watched Dave ski to the right of my line on a huge exposed spine, that entered the couloir half way down. A crazy line that he skied with grace, and claimed the line of his life.

Keeping with the couloir theme, we approached another peak where we had to belay one another across this shelf to get to its entrance. There is something 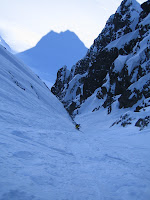 about a guarded line that makes it that much more special. I dropped in a steep spined face that lead to the couloir, rappelling down the rope for the first bit, then skiing to a safe spot until Dave leap-froged me. Half way down I dug in an anchor and we rappelled through an icy choke, then carefully skied the last of the 3000 footer to the sled. We skied this line using ice axes instead of poles. I called this line ‘God’s Hands’ because that’s exactly where we were!

Tim Grey met us at the cabin in time to witness us at the climax of our trip.

Day 5 – Sunny. We skied some of the ‘mellow’ lines with Tim, and explored the glaciers looking for more North faces. 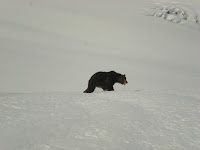 Day 6 – We ate pancakes in the sun, then warmed Tim up on . As he skied to the sled, a grizzly bear crawled out of the snow and started climbing up the slop. I ripped to the top and dropped in as he was gaining the ridge. I hoped to 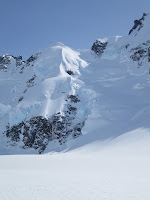 ski with him, but settled for a close up view and exchanged anxious glances.

We then headed off exploring more of the Frank Mackie glacier, finding a gem of a North Face that was covered in big hanging seracs. Amongst the ice was a spine that was sun lit. We skinned up, then climbed over the burgschrund to the peak. The ski down was epic as there was ice beside, below, and eventually above us. 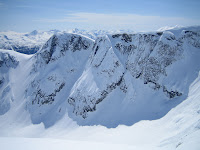 Day 7 – Sunny and warm. We woke early to get into a slot on a cliff that was covered in a big cornice. The slot faced North and the snow was good, but when Dave and I got to the choke, where we were about to build an anchor to rappel down, warm sloughs on the east facing cliff started coming down on us. We were able to dodge the heaviest parts, then quickly put our crampons on, and basically run back up the line. 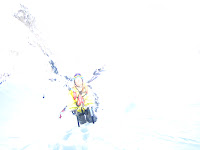 Looking back on this epic mission, we realized that we had prayed on top of every peak – something we normally reserve for the few scary lines per year. We also noticed white hawks (no not sea gulls) circling above us as we climbed and skied throughout the week. What a trip!!