March was amazing, but April is awesome! 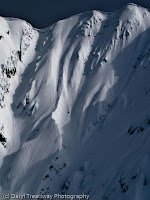 Weathered locals compare this season's snowfall to one more then a foggy decade past; a time before my time on the coast. I have never seen these mountains so perfectly plastered. Our challenge has been timing proper light for alpine descents, and the past 2 weeks our patience and perseverance was rewarded with a few clear days.
Bro Dave, Athan Merrick from Dendrite Studios, photog Chris Christie and I tapped into some of our local hills around 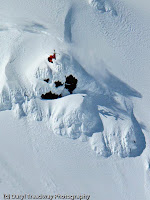 Pemberton, squeezing out every possible shot the light would allow. After 2 long days of sun we had bagged some good lines despite the competition from many other amped film/photo crews feeling pressure to produce sunny segments.

It was disheartening to see so many people in areas normally reserved for a dozen local Pembertonians, yet most respected the unwritten rules of the backcountry. Even Terje, who's heli used our skis as a landmark to guid them onto the peak we were setting up to ski, politely admitted to his greasy snowboard ways and let us work the face. 'What goes around comes around' and later 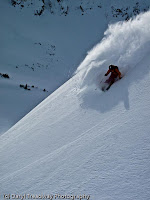 that week we were the slower crew sledding up to the same group on the same peak.

Athan and Nick are now pulling late nights to prepare for the Intersession film contest on Wednesday, April 20th; so I guess Dave and I will venture a little deeper, hopefully escaping the helis and hype of the crowded Whistlerites.
Posted by treadski at 9:26 AM