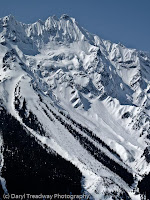 Through the success and failures of this season's skiing, I've realized how some lines are really a gift to be shredded when proper snow, light, stability, and stars align; while other mountains are not for the faint of heart, and don't grant access until they are ready ... or until we are ready.

This week bro Dave and I stood on the shoulders of giants as we joined veterans Dave B. and Jon Johnson 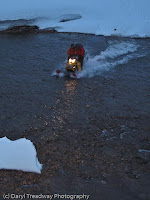 in pioneering a new route up a rugged volcano. Combining our experience and skills we made like mullets and attacked from the back, shaving off 6 hrs from the traditional ascent. Our modern approach took advantage of modern technology in snowmobiles, and we rode tandem over rivers, through avi paths, around crevasses, and up near vertical walls. After an hour and 6500 feet of elevation gain we traded 2-strokes for crampons and an easy boot back later we peered over the edge for a long anticipated view.

Despite the previous day's 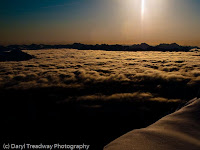 efforts putting in a sled track, and previous years of exploring the area, today's run was a gift. The sun had just come over the mountains, the valley clouds were holding off, and the snow was perfect. We were in the right place at the right time, in the right mind, and with the right people. 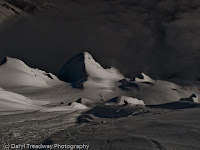 Dave dropped first, bouncing from side to side down a 1500 foot spine to a safe perch. I followed on an adjacent spine that split into a snake tongue, steepened, cruxed, then spined again. I skied out the fan screaming with double fist pumps and grinning ear to ear. Jon and Dave B. had a different entrance, but similar results. This upper face is really the gem, but we still had a mile of vert. to descend to our waiting snowmobiles. By 9:30 AM we were back at base camp, drinks in hand, toasting our fortune filled lines that loomed far overhead.

This is a significant peak that has stared me down many days, including the morning my wife and I were engaged at it's volcanic base. 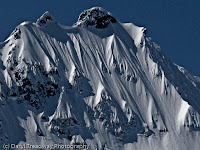 To summit and safely descend required all our wisdom, skill, commitment, fortune, and focus; and in return it gave us it's all.
We know of seven others to ski here; two of whom were present, while Jack and Beaker's legacys remain written on the snow covered walls. We are so fortunate to have these days that we can share with brothers, and return home to share our experience with wives and friends (if our wives still speak to us).
I earned 'husband of the year' status for my immediate return, while double D's and Jon attempted the dark north face. Jon was taken out by an unsuccessful river crossing in rising tides, while double D's slayed more long, perfect spines.
Posted by treadski at 8:46 AM