Productions at North Cascade Heli ops in northern W.A., my ruber arm was contorted, and I accepted my mission of driving 10 hrs each way for two possibly days of heli skiing.

On day 1 the heli remained grounded and became less visable under the falling snow. Our consolation prize was cat skiing in blower pow! Not bad.

Day 2 the turbine wound up as we loaded skis and flew to Mt. Silverstar

where we filmed sub-alpine pow shots and a few airs. 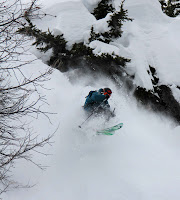